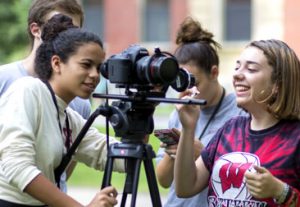 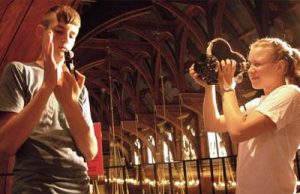 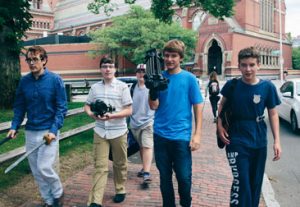 The New York Film Academy is a premier filmmaking, acting, visual and performing arts summer camp for kids aged 14-17. The programs are designed for students to learn on professional equipment from instructors with advanced degrees and industry experience during one-week and two-week sessions. Summer camp participants may study filmmaking, acting for film, 3D animation, photography and game design. Students should be prepared to devote additional hours of their own time for rehearsal and preparation.

All workshops are owned and operated by the New York Film Academy and are not affiliated with Harvard University.

Summer camps in filmmaking, film acting, and 3D animation are offered by the New York Film Academy each summer at Harvard University. Students living on campus will reside in Claverly Hall, part of the Adam’s House dormitory complex, a ten minute walk to Memorial Hall. Most of the day is spent on shoots on campus with instructors or teaching assistants, and/or working in professional labs with industry standard software and equipment.

All courses are taught in English. There are dormitory housing options for non-commuting students.

The staff team consists of working professionals in the industry and teaching assistants.

The New York Film Academy has an open enrollment process. No previous filmmaking experience is required. However, the workshops are extremely intensive. The nature of filmmaking necessitates that students be willing to devote themselves to their own projects as well as to their classmate’s projects.

Early application submission is recommended in order to secure a place in the workshop of your choice.

Rates reflect the average cost per full day for comparison purposes only.

Each camp profile is provided for informational purposes only and is current as of the date published or updated. Motherly Life does not represent or warrant information provided herein. Please contact the camp directly to confirm current services and rates.